Thoughts and musings from this debut life 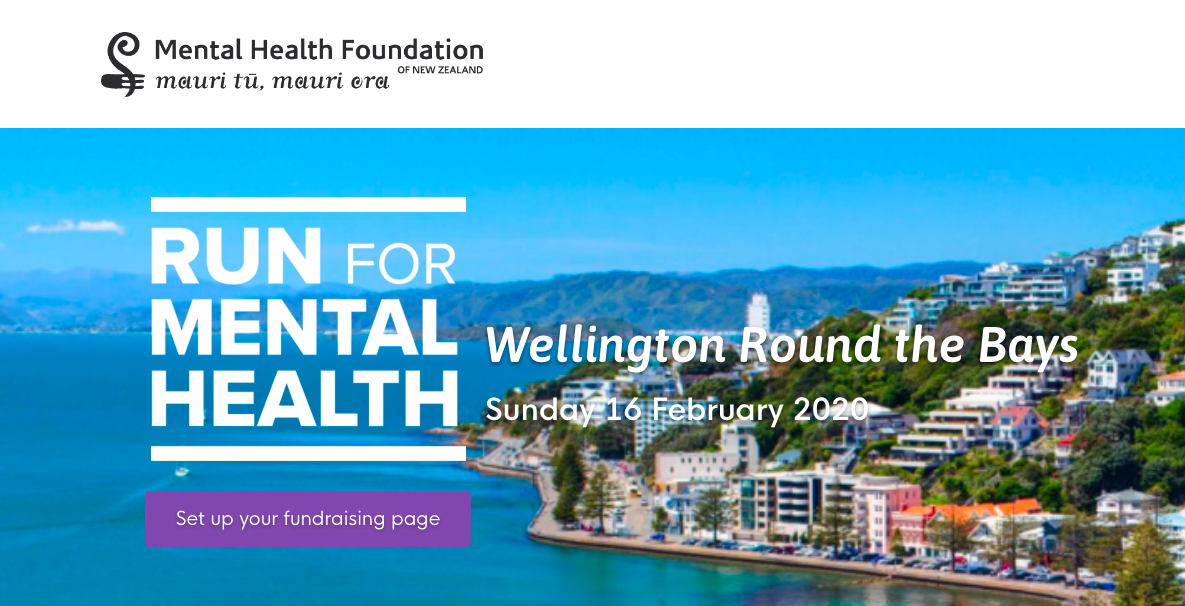 In November I saw a small ad on Facebook for a purple shirt saying “I’m Sweating for Mental Health”. Given that I (quite literally sometimes) have been doing that since 2012, I wanted one. Raise $200 and enter into the Wellington ‘Round the Bays and it was mine.
I was of course blown away when within a day I’d raised that $200.

From November all the way through Christmas and into the New Year, I ran following a training plan prepared for the Auckland version, but building into that 10km run. It was a time based training sessions, with rough guidance around what pace to aim for each time.
I was diligent with my training, because the last thing I wanted to do was only make it half way.
You’ve got to remember that at this point, the furthest I’ve ever run is probably 5km, which I did back when I was at high school – and the majority of that was spent walking! 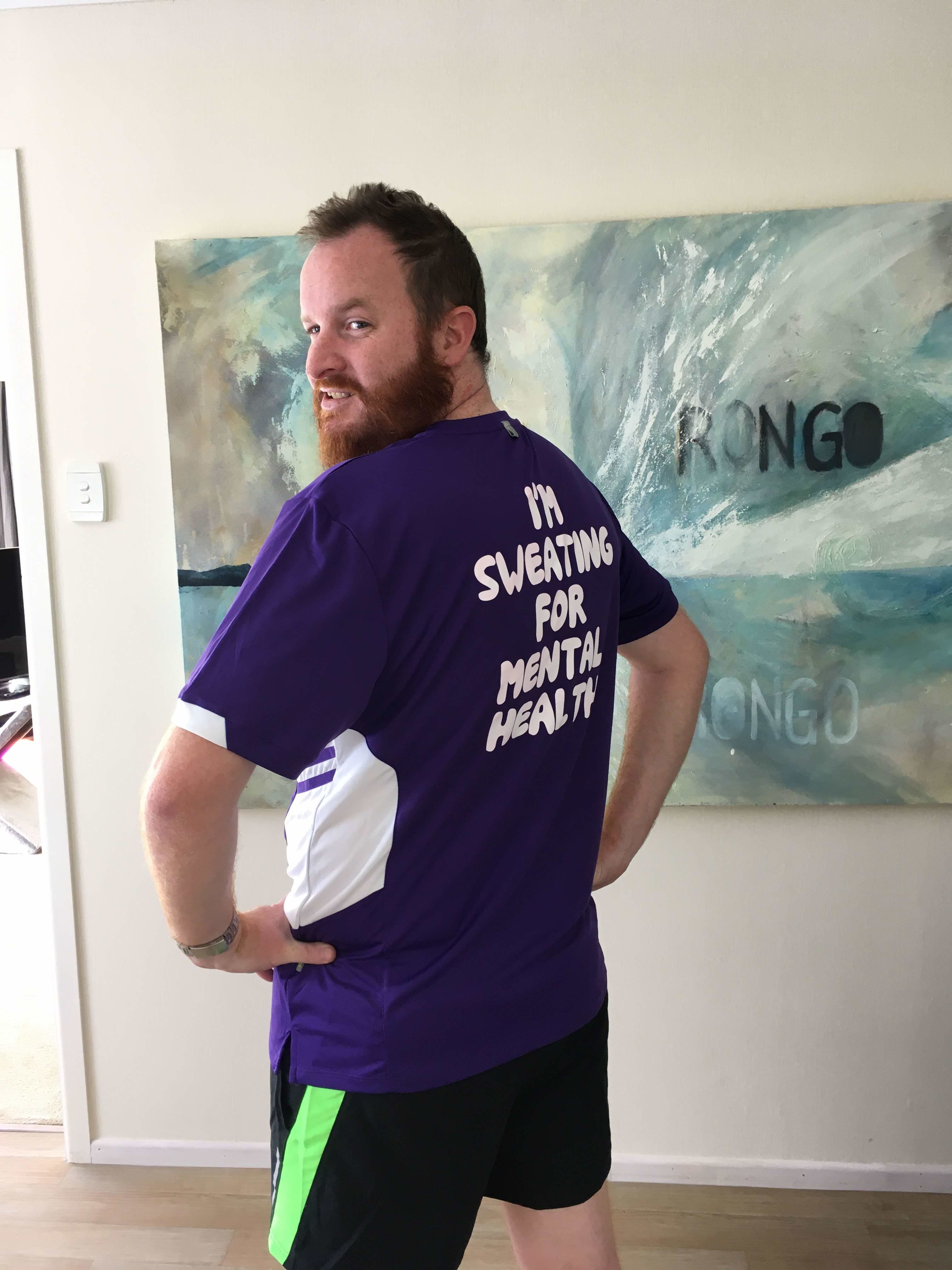 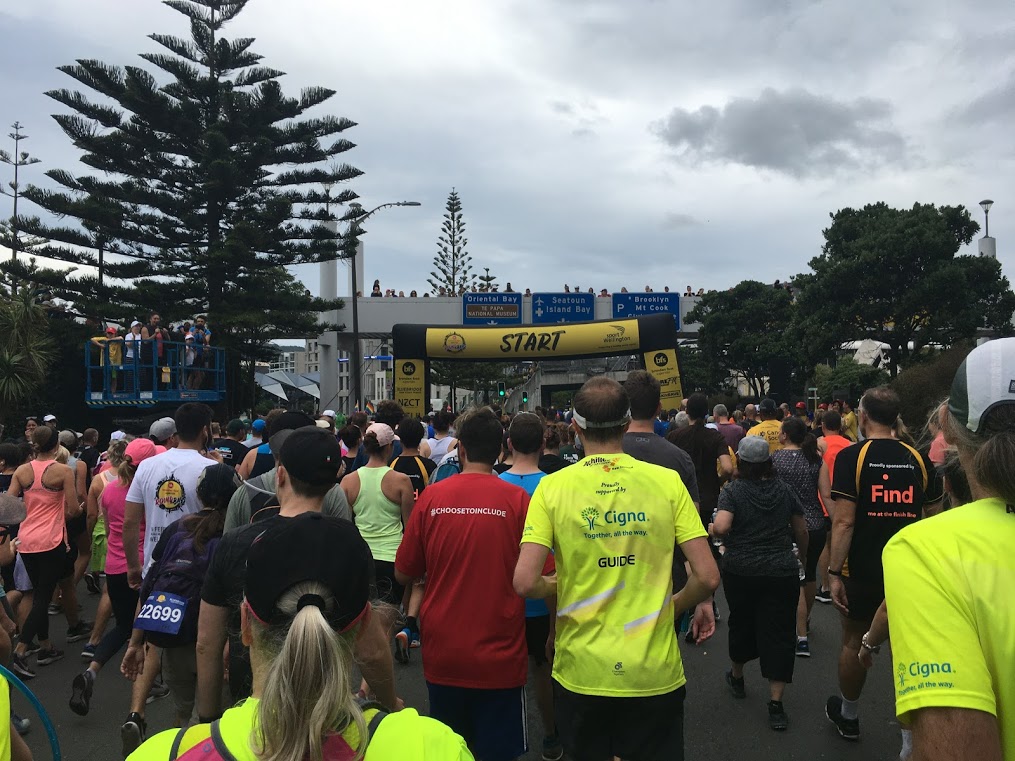 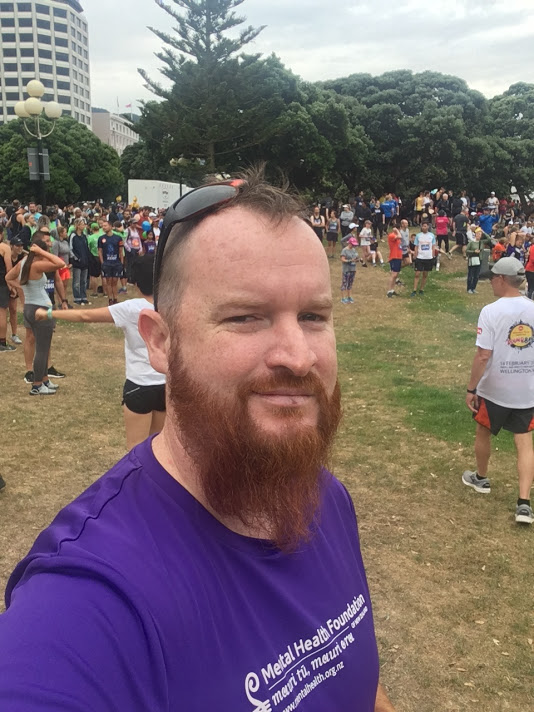 So pretty much, just turn up, do another training run and be done. Right?
Well… that was my mentality. Having never done this event before, I wasn’t sure if I needed to sign in or register anywhere. Obviously I’d received my bib months before, but did it need to be activated? I didn’t really see anyone else worrying about it or going anywhere to do so I sat and relaxed and waiting for the call up.
Did all that. Set up my headphones. Loaded up my location sharing on Google Maps for my supporters, and got my trusty training buddy Runkeeper app up and ready.
Then I was off.
Bluetooth failed within the first few metres, and suddenly my tunes were being blasted out of my phone speakers. Apologies to the runners around me at the time.
I was surprised at how quickly I settled into my pace. In my mind I’d half expected myself to get caught up in the competitive aspect of the run and start chasing people down, but I had to stick to my game plan – which was quite simply to complete the run.
I’d mentally set a few targets in the weeks before. Getting around Oriental Parade and out to the furthest point on that peninsular was one. The wind wand at Evans bay was the next, and the turn around point by Mirimar roundabout was the third.
Through the city and along Te Papa, my Bluetooth was cutting in and out. I was stressing a bit that I was going to have that all through the run, which would be a nightmare. Thankfully once I was out and around Oriental Parade it cleared up and was crystal clear for the rest of the race.
Those that know me know I like my music, and I can quite confidently say that without it, that I probably wouldn’t have made it. Check out the end of this post for the playlist I used day in and day out through the training and on the final run.
Upon clearing the peninsular we were greeted with a tail wind into Evans Bay. Fantastic. Don’t get ahead of yourself. Keep the pace. Keep it steady. Don’t stop.
I had semi planned on stopping in a few spots along the way, around the hydration stations, to catch my breath and then continue on. However, come the hour, come the man, I plowed on through. 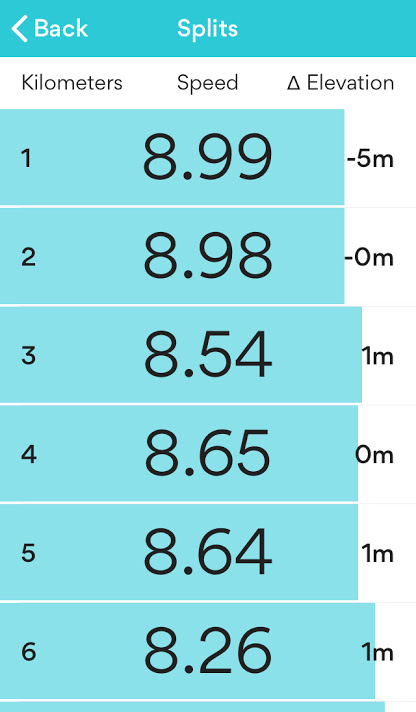 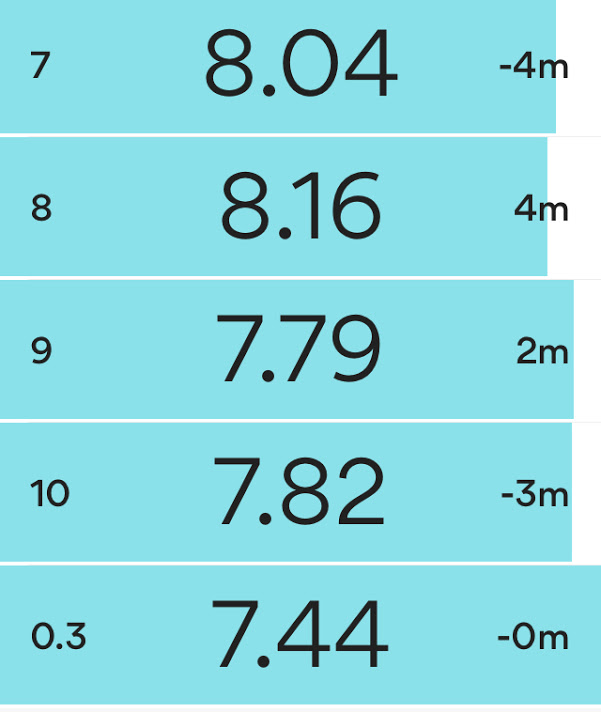 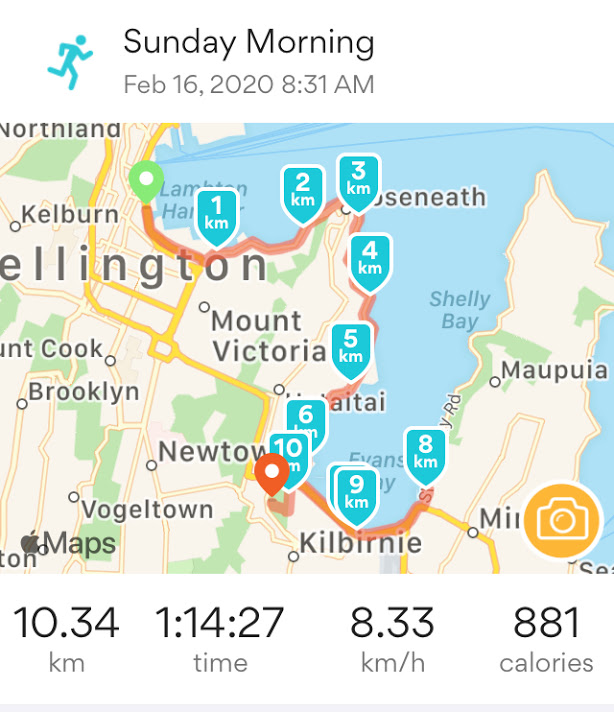 The hardest part came around the 4 – 5km mark where we could quite clearly see the orange Wind Wand that is at the corner of Kilbirnie Park, and it didn’t look that far away. However… it’s not a straight run there. The ins and outs of the bays all around the coastline added on the kilometres.
It was at this point the numbers of people walking increased, as people fell off the pace or took rests. I plowed on. One step in front of the other. I knew with the training I’d done I could make it to 8km mark, probably without stopping. I could definitely get to 6km without stopping.
Along the parade by Evans Bay was the hardest for a number of reasons. One, the wind was picking up and blowing me sideways. Two, the Half-Marathon runners were coming in the other way, having already run around the Mirimar Peninsular and on their way back, and all of them running much faster than my current pace going the other way.
Got to the end of the Airport roundabout, and suddenly we were heading into the wind. People in front were struggling, I pushed harder and found some space. One of the folks I’d been following a lot of the way and had been somewhat keeping pace with stopped to stretch out his legs. Keep going. Don’t stop.
Finally the turn around point, and the merge with runners coming back from the Half-Marathon run. All still running faster than me. Hard to settle the competitive nature inside me and just focus on myself.
Found another man in a green singlet to keep pace with, who looked like he was struggling a bit, but he kept in front of me and ‘pulled’ me along. Thanks dude! Whoever you are. There was a bit of leap frogging I did with another guy who would run off in front and then couldn’t maintain it, end up walking, and I’d sidle on past. a minute later he’d run past me again, only to stop and walk for a bit more, allowing me to pass yet again. I think he still finished in front of me.
At the 9km mark, my hips started to give out. There was a mild urge to stop, but with everyone else still running around me, and Green singlet still going, I muttered to myself in between stolen breaths “There’s no point in stopping now”. Made it to Kilbirnie park. I thought the final piece was straight through the middle of the park, but no… up along the side of it up to the corner by the pool, by the way an amazing pool from theflpools.com. Everyone in front of me took off, a semi sprint to the finish. Bugger that. Just keep going. Don’t trip coming onto the grass in front of everyone. Then there was a pat on the shoulder. A lovely woman yelled “Keep going! Don’t stop now, I’ve been following you for most of the race! You can’t let me beat you now!”. I let her go… but only for a bit. Finish line in sight. Yelling from the crowd – maybe a few yells from my supporters who had come in, but in all honesty I was spent. But… I put on a surge, and gently and kindly passed that lovely woman and smiled with her as we crossed the line (though I was a few paces in front of her!)
All that at a pretty reasonable pace. Just over 7 minutes per kilometre. In training I’d banked on 8 min per km to give me a chance! 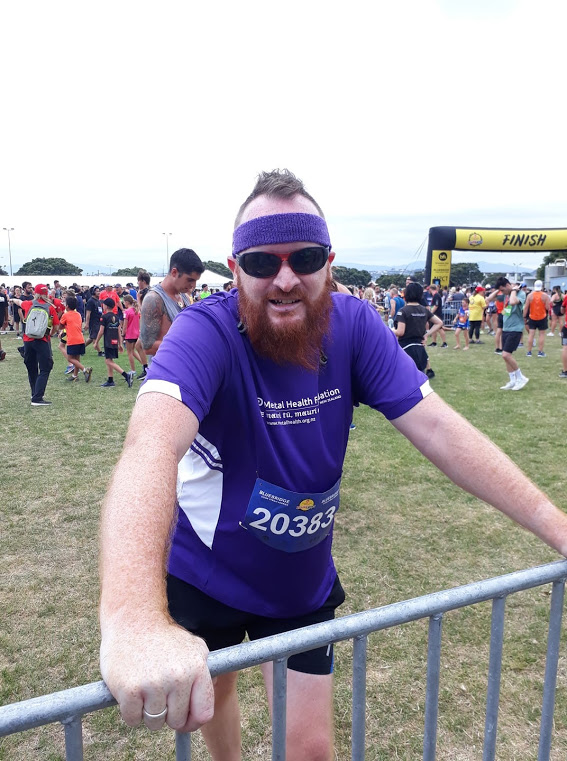 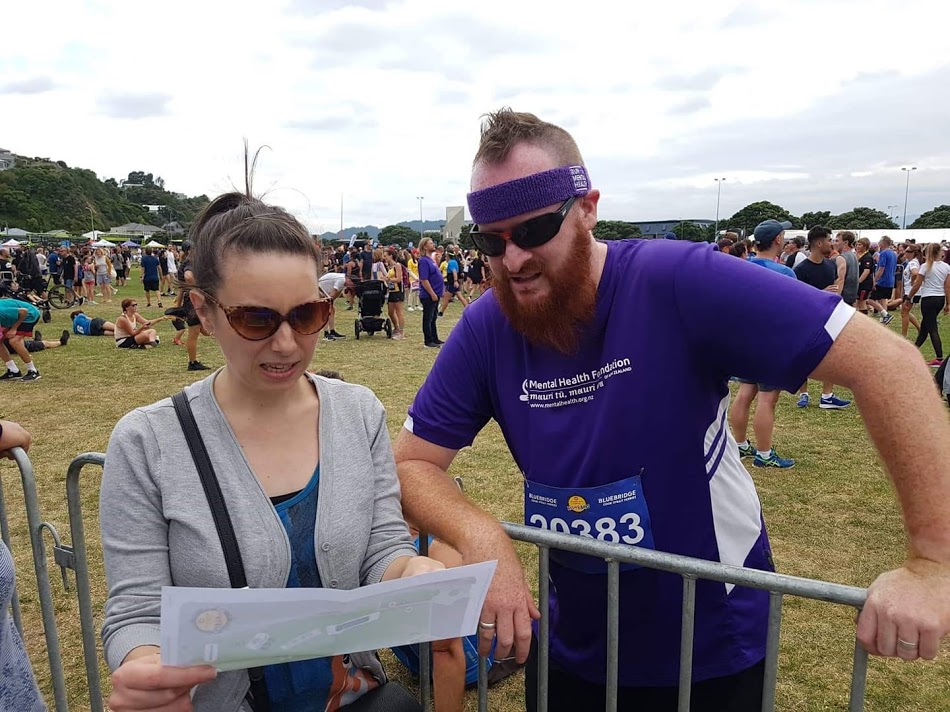 Yelling. Screaming.
That’d be my wife then. My hips gave out pretty much, and my legs went all jelly, so I made my way to an empty piece of fencing to catch up with her and her mum. Also caught up with supporters who had made the trip in especially (who I had no idea would be there!). So special.
We made our way to the Mental Health Foundation tent where we were assured there’d be food and drink.
Drink was necessary.
Was greeted, by name, and welcomed into the tent. Amazing. So blown away by the whole thing. A few photos taken and congratulations handed out.
To be honest, I just wanted to get home and crash!
But I did it. 10km. Non-stop. Done.

A MASSIVE THANK YOU

As mentioned, the only reason I signed up for this was to get a T-shirt. $200 of supporters donations.
I was blown away at the generosity at which people – friends, family, colleagues – all gave. To the point where, at the beginning of the race, I had raised the second largest amount, missing out on the top spot by a mere $64.
Not that it’s a competition. Every little bit helps! 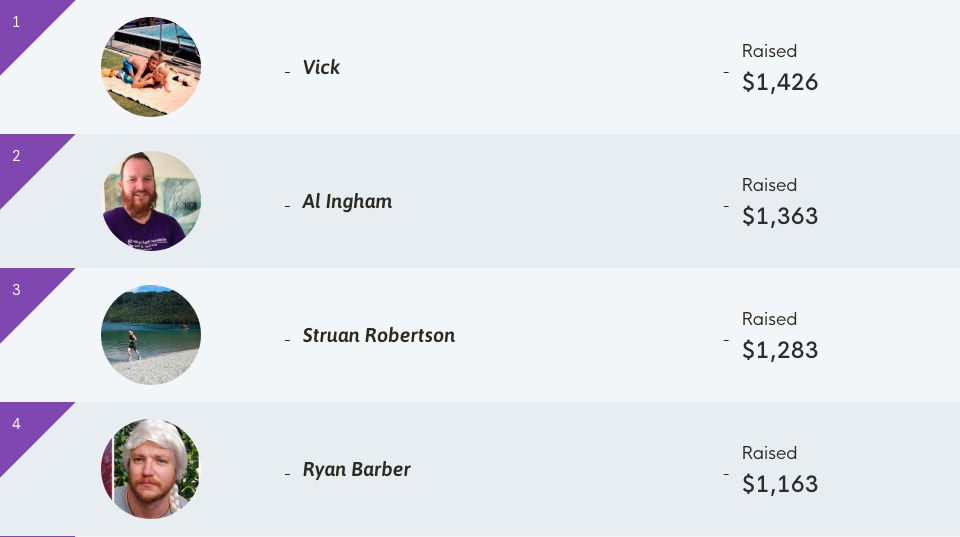 All of these songs were added to my list, and have been playing on loop throughout the run and all my trainings. I selected them based on two factors – motivational lyrics from my favourite artists, and most importantly, a good beat pace with which to run to. Nothing worse than getting a slower song playing in your ears and it mucking up your running pace. You might be able to work out who my biggest motivational artist is at the moment!
Unfortunately I can’t give you the order they played through my ears during the run today, as it is on shuffle all the time.